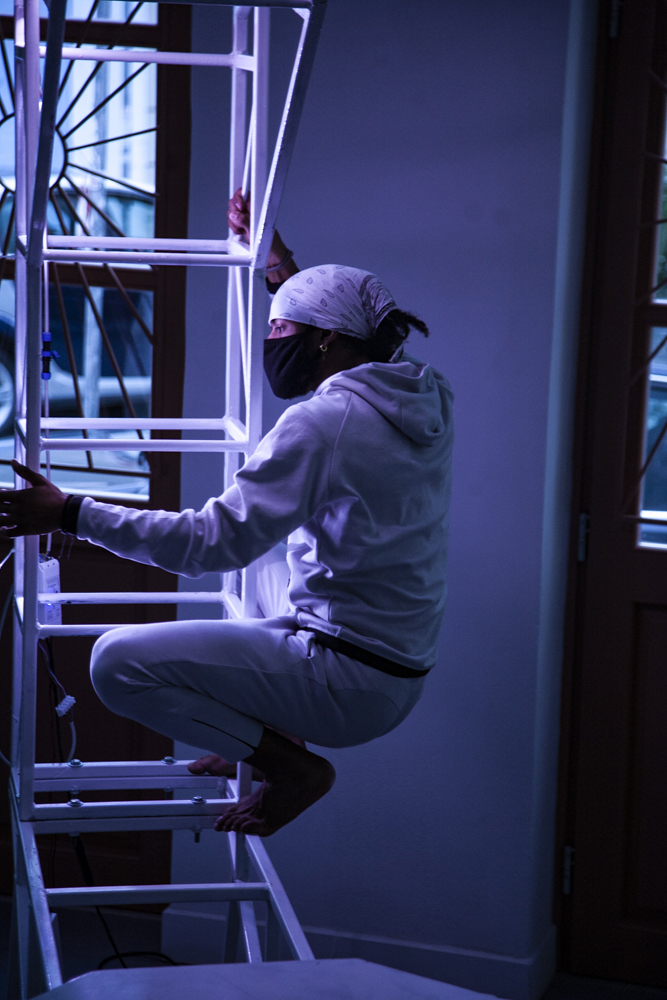 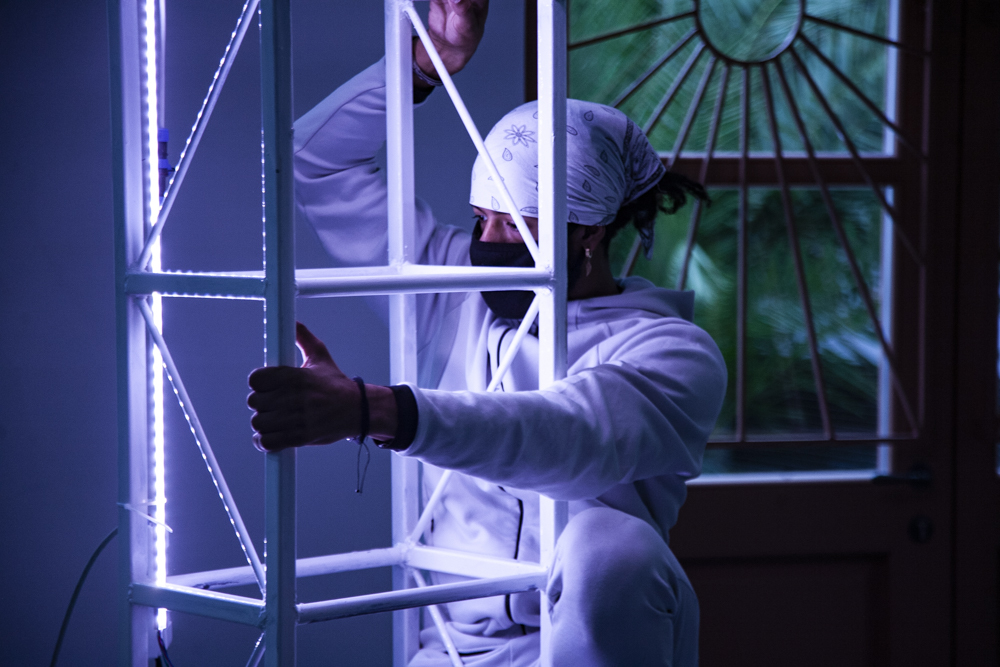 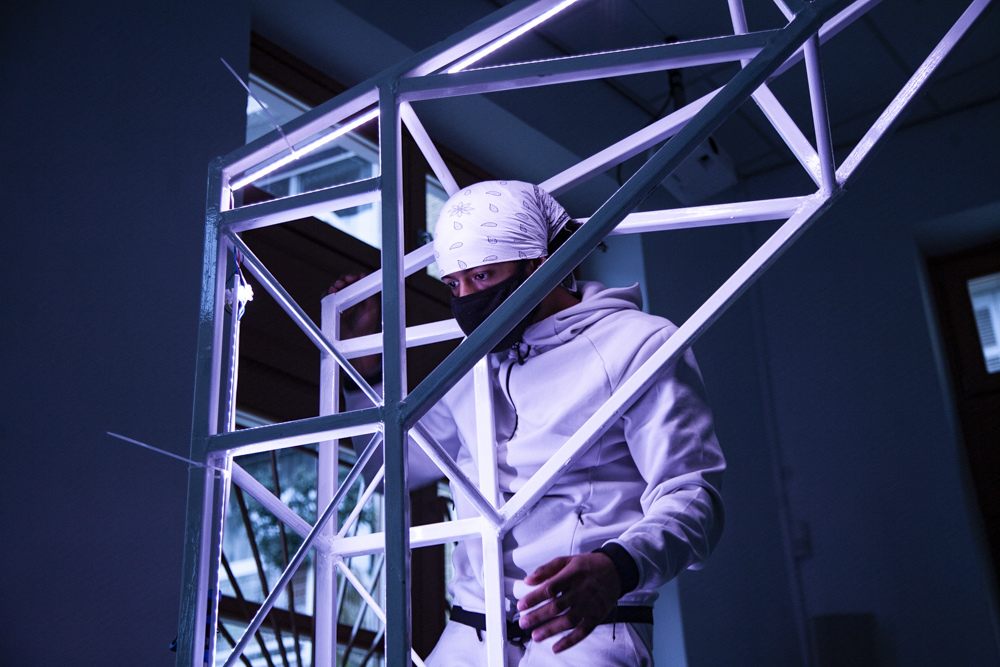 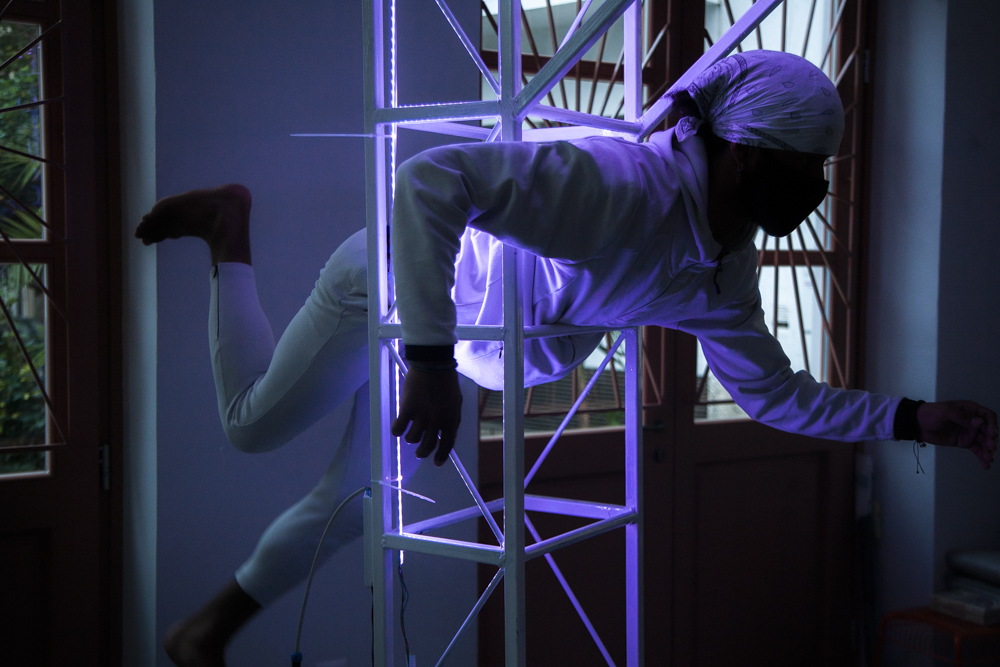 This autumn, Flux Laboratory Athens invited as artist-in-residence researcher and choreographer Chloe Aligianni. Aligianni will deploy her practice, by opening up a dialogue between art and science, while stimulating curiosity about the cosmos in relation to the planet we call ‘home’. Aligianni looks for methodological intersections in the research process between choreography and astrophysics, highlighting the creative synthesis of the two fields.

From the 16th of November until the 13th of December, her project ‘The Space Cadet’ will take over the space of Flux Laboratory Athens. Dancer Aggelos Apostolidis (Fuerza Negra) who was selected through audition, will activate the in-situ installation, interacting with the ‘illuminating landscape’ especially designed by light designer Anna Sbokou.
‘The Space Cadet’ examines the poetics of space exploration through the astronaut experience. With the use of movement, light and sound, the performance space and the performer are constantly transported into places and cover large distances, while staying in a -seemingly- confined space.

In compliance with the existing measures, this work in progress is implemented with the form of rehearsals. Simultaneously, the whole process will be documented and transmitted through Flux Laboratory’s communication channels.

In the future, ‘The Space Cadet’ will be travelling as a pop-up performance in public spaces of Greece and abroad.

Chloe Aligianni is a choreographer, facilitator and multidisciplinary artist. With a background in both fine art and dance, she is a Chisenhale Dance Space Artist Member and FreeSpace artist at Studio Wayne MacGregor. Her choreographic work has been supported by Arts Council England, local authority and arts organisations, including also movement directing for theatre and the visual arts. She is currently part of the Maths Meets Arts collaborative project at the University of Leicester led by mathematician Dr. Katrin Leschke (University of Leicester) and splits her practice between the UK & Greece. She has taught contemporary dance for the Royal Academy’s Step Into Dance Programme, Central Foundation Girl’s School, Chisenhale Dance Space and led classes and workshops for adults, young people and professionals in the UK & Europe.

Aggelos Apostolidis (Fuerza Negra) was born in Havana, Cuba in 1991 and after two years he moved to Athens where he is currently based. His first contact with dance was in 2004, practicing dance style Krump (Kingdom Radical Uplifted Might Price) since he was deeply influenced by the documentary “RiZe”. Since 2006 he has been intensively involved in Hip-Hop Dance, while developing other street dance styles (Poppin, Breakin, Lockin). Equally important has been the experience he gained through his attendance in seminars by renowned dancers from all over the world. He has received significant distinctions both individually, as well as with the various dance groups he represents. In 2017, by creating the professional dance group "A Move Called Mess" (A.M.C.M), he actively participated in the creation of professional dance cinema videos, such as " “Noon Mess”, where he was the director and choreographer. He has collaborated with director Giannis Skourletis and with the Alternative Stage of the Greek National Opera at the Stavros Niarchos Foundation Cultural Centre. Last but not least, he has many years of experience as dance teacher.

Hellenic Ministry of Culture and Sports